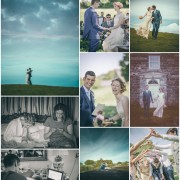 We often hear a lot of people explaining about how ‘home made’ their wedding details are, how they have customised certain details of their big day, or how much time they have put into making their own day exactly how they want it to be, but Amy and Shane took this to a whole new level! Never before have we walked into a hotel room to find the bride putting the final stitches into the wedding dress that she made herself from scratch!

Shane and Amy had travelled up from London to have a bohemian blessing at the fabulous Seiont Manor Hotel in the heart of Snowdonia, having been married a few days previously at a registry office ceremony in their native lands! The reason? They love Snowdonia! In fact, they love Snowdonia so much that at least half of the wedding party climbed the mighty Tryfan the day before the wedding, leaving many aching and glad to sit down during the less hectic moments of the day!

The seating for the ceremony was set up beneath three of the oldest and grandest oak trees within the grounds of the hotel and the blessing was led by a close friend in the beautiful dappled light that the trees provided. A makeshift ‘choir’ (of three!) led the singing, tears of happiness were everywhere and an amazing time was had by all!

In the afternoon there was dancing to be done! A live Celidh band provided entertainment and some funky calling for the drinks reception which could, thanks to the beautiful weather, be held outside. We even managed to get out to the stunningly calm Llyn Padarn for some pretty pics, shooting straight into the sun for maximum dramatic effect.

Normally, we like to thank and mention the hair, makeup and venue dressers at this point, but Amy and Shane did it all with the help of their friends and family, so there’s nobody to mention at all! Amy did her own hair and makeup in the morning (whilst finishing off the aforementioned dress!) while Shane was busy getting the room ready. The simple and elegant flowers were as simple and elegant as it gets, and the pastel gerberas even played a starring roll in Amy’s hair.

All the best of luck and luck to you both-We feel privileged to have been chosen to shoot your big day for you and had an absolute ball!