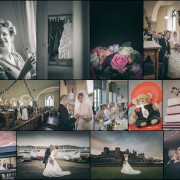 Sometimes, the North Wales weather isn’t all it’s cracked up to be! You just have to make the most of what you’re given, and while the morning and afternoon of Ceri and Gavin’s big day saw it raining heavily non-stop (and two very soggy photographers), it finally dried up enough to go out for some pictures around Conwy, much to everybody’s relief-Especially ours! The rain wouldn’t stop us of course, but it’s so much easier if it’s not chucking it down. It also makes for some pretty epic clouds when the rain stops!

Now, occasionally in weddings we will bump into a bride and groom that we have shot the wedding of previously (the beauty of recommendations!), and this was no exception. The difference is, there was not just one couple, but three previous Fresh Photography couples at the Deganwy Quay Hotel for Ceri and Gavin’s wedding! We seem to have become the photographers of choice for the Eglwysbach massive… It really was fantastic to see everyone there looking as young and as glamourous as they did on their own days!

Here’s a sneaky preview of the wedding pictures of the new Mr and Mrs Kenrick-Wishing you both lots of love, luck and best wishes for now and your future together!